As cliche as it is to drop a blog post during a time like this, I’m flippin’ doing it anyway.

Also since I have lost the desire to be on Instagram and Facebook much, this would be the closest to this crazy-wonderful digital world we stay connected on.

What did I mean by “a time like this”?

Early April, I was diagnosed with AML – acute myeloid leukaemia (fuck, that felt weird typing it out).

This happened literally right after I had been traveling a bunch and just as I had arrived in Spain.  The train ride from Madrid to Alicante was probably one of the worst rides I’ve ever had, as I was experiencing an odd type of fever – odd in the sense that it had been 2 days in a row, shivering uncontrollably, loss of appetite, foggy-mind-to-its-max, and a weird soreness to the body from doing jackshit.  Cutting it short, survived 2 more days of self-medicating til I decided it’s proooooobbbbaaallllly a good idea to visit a doctor then.  A check-up turned into a blood test, which turned into a transfer of hospital, which turned into more blood tests (8 jabs within a day, holymoly that’s my record of jabs, which have been ALL LEGAL, mind you) and a platelet transfusion, which turned into chemotherapy – and here I am.

Where am I on this journey?  I wish I knew more than you now know but we just really don’t for sure, do we?  There will be more chemo cycles with a chance that I’d need a bone marrow transplant.  I have no idea how my body will respond to each cycle of chemo and how likely or soon for remission (inserts a <shrugging> emoji).

But hey, I ain’t writing this post to share about what all happened and its timeline, so moving on.  This post is about “the feelings” – noting them, being aware of them.  (I must admit, I don’t remember much feelings while I was on morphine, just pain… and then hellooooo, morphine!)

I was, still am, well aware, that I might be lapped involuntarily with waves of emotions, particularly the ones we’re all not fond of.  Truthfully, I am not surprised I’ve been more calmed than disturbed.  I haven’t reached a conclusion on why yet, then again, must I?

There were moments that were surreal and I felt a little numb, ok perhaps not numb but very unfamiliar in identifying with the feeling, then accepting it.

Like when the first doctor in ER had told me what they found in my cells, what I am likely to be diagnosed with until they could confirm the next day, departing as his shift ended with “I am sorry and good luck to you” with such sympathy that I have never witnessed, until then, directed at me.  Describing it as numb would be incorrect, it felt – unfamiliar.

By the way, I had the funniest and kindest batch of nurses, despite the language barrier.

Like when my dad got the first possible flight out of Moscow and flew to Alicante to be with me and I witnessed a different type of hardship on his face when he opened my hospital room door.  I am not talking about tears or uncontrollable sobbing but the unspoken understanding between father and daughter that we were both hurting – him seeing his child in that state and me seeing my father suffering from sadness.  That was the first moment since the whole ordeal when I felt a pang of sadness, that my dad has to go through something like this – somehow, it motivated me to remain calm and collected.  That has been the process so far: FEEL -> IDENTIFY -> ACCEPT -> CHOOSE REACTION.

Like when my mom got her flight out of Knoxville to embark on a multiple-stop journey to Alicante, and all I could think of while waiting for her arrival was that how much she would enjoy the panederias (bakeries) here in Spain.  HEY, we’re croissant-people <shrugs>.  I don’t get to see my mom much.  For the past 14 years, we’ve seen each other on 2 occasions (now 3) and spent an accumulative time of almost a year together.  Nonetheless, we optimized those times the best we could.  She had been through a shitload of shit and still has to put up with shitty people around her just to make ends meet. I know my mom won’t be able to afford to keep flying between Tennessee and Hong Kong (once I am cleared to fly out of Spain), thus realizing cancer isn’t just expensive for me but costly for my loved ones.  In the most unfitting situation, I felt the deepest sense of gratitude, of worthiness, at the same time, feeling utterly helpless.  What a mix.

Like when I felt the strongest preference to shave my head instead of watching my hair fall out each day at a volume of a doll’s wig…a BIGASS doll.  Good Laaawwdy I have never seen so much hair fall out the way it did…and it led to a concern of vanity… I didn’t want to see myself resembling Gollum.  Yup, in this situation, still vain <shrugging monkey>.

Like when reality kicks in – how the fuck am I going to work and sustain unknown months or years?  Will I hinder recovery progress if I force stress upon myself for the sake of income?  Why can’t I allow myself to dip into savings without the sense of being a failure?  Am I letting pride in the way of practicality and best chances of healing?  This is the most self-doubting period I’ve experienced – ever.   (…Where’s that morphine…)

Like when I learned who had taken the time and effort off of work, to drive and fly over just to be with me at the hospital.  Having company around did more for me than I expected, as I usually treasure my solo time, never had I appreciate company this much.  It’s not the type of company that needs chattin’ to the entire time, chattin’ actually wipes me out, but their presence that gave me encouragement and strength.  My friends in Spain who have been nothing but helpful, supportive and encouraging, surprising me with photo cards and gifts. Even my lovelies who couldn’t make it to Spain but took more time out of their days to send me messages of love, in the most fun ways.  I had never been more certain of who truly cares about me than ever, and who are capable of loving hard.  This is the most loving period I’ve experienced – ever.

There are many more unfamiliar feelings but I will stop here for now.

I’m taking the days one at a time, as fatigue vs energy plus mood kinda varies each day.  Daily meditation and reading Krishnamurti has certainly helped in dealing with accepting this course of nature.  Catching up with messages from the wonderful online network also proved delightful and touching, especially the ones who took the time to share their personal struggles.  Reintroducing functions and movement like walking, walking for a longer time, walking on an incline, stairs, balance, proprioception, joint mobility, isolated activation on underactive muscle groups.  (Although that looks like a lot typed out, I am realistically only doing 3-8 reps of something before having to take a long ass break to do another set).  For those who are wondering why that reintroduction was needed – I was in the hospital bed for 25 days hooked on to drips, fasted 6-7 days out of that due to pain.  Walking for the first time out of my hospital room to Richard’s car felt….INTENSE.

Will I keep blogging?

Writing this out was therapeutic <thumbs up>.  Hope this helps you if you’re going through something similar with a loved one who is ill and could use a little insight.  Everyone is different obviously, that doesn’t mean we can’t be similar either.

Something I’d like to share on that is spot on below.  Thank you for this one, SH. 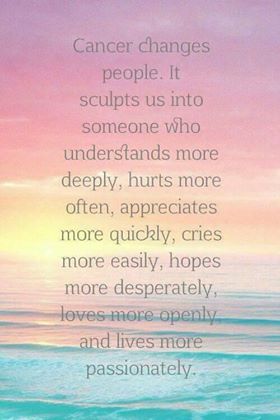 3 thoughts on “Unfamiliar Feelings – The Diagnosis”